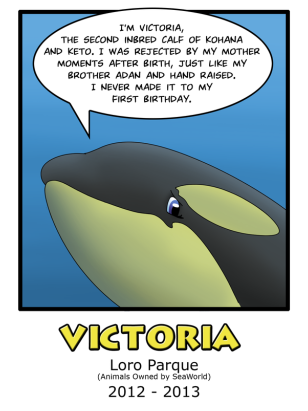 When SeaWorld sent four of their orca to Tenerife marine entertainment park Loro Parque on a breeding loan, many were shocked at their choice of individuals. Not only were all four rather young, with the two youngest only being two and three years old, the two youngest were also the two females.  Having been taken from their mothers at such a young age, neither had any experience in or knowledge of raising calves. Furthermore, all four orca were closely related; three of them were either full or half siblings, with the exception of one male and female who were instead uncle and niece.

Not only was Sea World sending these young orca into an environment with no adults to provide social support and stability, they were intending them to breed, despite their close relation to each other and their relatively young age.

Regardless, Loro Parque persisted and the eldest female, known as Kohana, gave birth to a young male named Adan. As Kohana had no experience at all with raising a calf, she rejected and abandoned Adan moments after his birth. Adan had to be hand-raised by the staff.

Adan’s father was Keto, Kohana’s uncle, making Adan the second orca in SeaWorld’s collection to be a result of close inbreeding.

However, rather than learn from this mistake, Kohana was allowed to become pregnant again (the calf being sired once more by Keto) almost immediately. She gave birth to a female calf they named Victoria (or Vicky for short). Vicky was now the third living calf that had resulted from close inbreeding in SeaWorld’s collection.

Kohana abandoned and rejected her daughter just as she did with Adan. Staff were forced once again to step in and separate Victoria from her mother and hand-raise her. They kept her and her brother Adan in the medical pool, away from the other orca for most of the time. Victoria spent the majority of her life alone with only trainers and inflatable inner tubes as her companions.

On June 16th 2013, at not even one year of age, Victoria died suddenly and with no warning. Loro Parque has yet to reveal her cause(s) of death.
Back