Orca Aware is sponsored by British Divers Marine Life Rescue (BDMLR), providing up-to-date information and resources about everything orca. It is an information campaign that acts as a source-pool for scientific, educational and journalistic material reporting on killer whales found both in the wild and in captivity around the world. There are at time of writing, around 40 known free-ranging orca populations currently living in our oceans and a total of 63 known orca in captivity. Orca Aware aims to assemble news and information from the many different research, conservation and welfare groups that study and educate about these apex ocean predators so you can appreciate orca on a whole new level.

Orca Aware is based in the UK. Many people living in Great Britain are unaware that orca inhabit the waters off our coast. We even have our own resident population! Why is this important? Having orca off our shores shows us just how close to home this amazing species really is and as apex ocean predators, orca give us clues as to the state our oceans are in. We should care about orca, learn about them and help address the conservation and welfare threats they face. By doing so, we will learn to better protect our oceans and planet. ​

Click to request an Orca Aware talk or workshop
Our Team 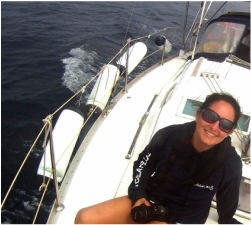 Sam's passion for orca was first ignited when she watched the movie Free Willy. Her first taste of orca conservation soon followed when she began sponsoring an orca with the Whale and Dolphin Conservation / OrcaLab adoption scheme. After exploring all orca-related resources that she could find, Sam came to the conclusion that these large, sentient beings should not be kept in captivity. She decided if she wanted to pursue a career with orca, it would have to be in the wild.

Sam has worked with the UK's marine mammal rescue charity British Divers Marine Life Rescue since 2007 as a medic and course tutor. She was formerly part of the head office staff and in 2018 was appointed Thames region coordinator, her first task assessing the beluga whale that appeared in the river after just one week in post. Sam also volunteers with the Orca Research Trust and Free Morgan Foundation led by orca researcher Dr. Ingrid Visser. It was during Sam's time working with Dr. Visser in New Zealand that she had her first encounter with wild orca. Sam has since observed orca in the UK, Pacific Northwest, Iceland and Strait of Gibraltar.

Since 2009, Sam has been working alongside a dedicated group of orca freedom advocates to raise awareness about the plight of captive orca. She is a scholar-advocate for the Non-Human Rights Project, previously leading the literature search on orca and presented at the Human Behaviour Change for Animal Welfare conference, co-authoring a talk on human behaviour change for captive orca with Dr. Visser. Sam has previously held the positions of Communications Chair for the World Cetacean Alliance and Chair of the Dolphinaria-Free Europe coalition, the latter for which she remains on the Management Committee.

Sam holds a BSc (Hons) degree in Zoology from Durham University and a Postgraduate Diploma in International Animal Welfare, Ethics and Law from the University of Edinburgh.
Further work Sam has been involved in:
Blogs   -   Articles   -   Interviews & Media   -   ​Photography   - ​  Orca Tracker

Claire's passion for orca was sparked by a brief glimpse of a pod near the Lofoten Islands, Norway in 1998. Despite going on numerous whale watching trips Claire didn't encounter free-living orca again until 2013, when she spent a magical week in Grundarfjordur for WhaleFest in Iceland. She was lucky enough to spend time in the company of top orca experts and research scientists, and to experience breathtakingly close encounters with orca from both from boats and the shore - watching them feeding, socialising and even breaching right in front of her hotel room window one morning! Now completely under the spell of orca, Claire is already planning a trip to Vancouver Island in the hope of encountering both the Northern resident community and Bigg's (transient) orca. Her ultimate goal is to watch orca in British waters, particularly having missed encountering the 'West Coast Community' off the Isle of Mull by just a few hours last year.

Claire is a freelance writer and naturalist. She writes a regular column for The Guardian's Country Diary, contributes to a number of other publications and worked as one of the main researchers and writers for the 2020VISION project. Passionate about wildlife and wild places, she has a particular interest in anthrozoology (human-animal interaction) and is now busy researching the mythology and cultural significance of orca in a worldwide context. Claire has a BA (Hons) English, an MA in Creative Writing specialising in Natural History and Ecocriticism and she graduated in 2011 with a Postgraduate Certificate in Biodiversity, Wildlife and Ecosystem Health. She is hoping to begin a MA Anthrozoology in 2014.

Claire trained as a marine mammal medic with British Divers Marine Life Rescue in 2006 and held the post of area coordinator for Hampshire for five years. She teaches on medic courses and has been involved in a number of rescues including seals, porpoises and a northern bottlenose whale. Claire has also undertaken MARINElife's marine mammal and seabird surveyor training course, and holds a boat handling qualification.
Read Claire's The Guardian Country Diary article about orca:
Following the shoals of herring - with a pod of killer whales.

Stephen’s interest in whales and dolphins began with quite a negative experience. Whilst in Vancouver, British Columbia on business in 1989 he visited the aquarium and was horrified to see orca and beluga whales imprisoned there. He immediately made a pact with himself to become more involved in cetacean conservation and from then on has opposed the captive industry.

In 2003, after decades working in advertising and marketing, Stephen closed his London-based advertising agency and began consulting for human and animal welfare charities. He started working for the whale and dolphin charity ORCA.  As Corporate Development Manager he helped to rejuvenate the charity’s fortunes over a three year period, creating a robust platform from which the charity could grow. At the end of the three year contract, Stephen continued to volunteer on ORCA’s board as a Trustee and Vice Chair, having a particular focus on public interactions and marketing. He also runs Marine Mammal Surveyor training courses for ORCA, as well as leading whale watching trips for the charity. In 2015, Stephen took on the role of Rescue & Care Coordinator for the Dolphinaria-Free Europe coalition.

Stephen is the former Operations Manager and National Coordinator for British Divers Marine Life Rescue, stepping down after eight years in 2018 to embark on an adventure of a life-time: Around the World in 80 Whales. Stephen’s day job involved working closely with the charity’s team of 2,800 volunteers around the UK, rescuing whales, dolphins, porpoises, seals and turtles.

Stephen has sat on a number of UK and international governmental, military and charity conservation committees, including the Marine Management Organisation's marine wildlife crime enforcement unit, the Underwater Sound Forum, Marine Animal Rescue Coalition, Wildlife and Countryside Link and as an observer at ASCOBANS. As well as giving public talks about wildlife around the world, he has lectured on marine animal welfare, rescue and whale and dolphin population studies at a number of universities, as well as the Royal Veterinary College and for the RSPCA.  Stephen also leads whale-watching trips in the Bay of Biscay with ORCA and has run BDMLR rescue courses in the UAE and Kenya.
Follow Stephen's latest adventures here:
Around the World in 80 Whales

Suzie has loved orca since a young child and has made it her mission to read and watch everything orca that she can get her hands on. In 2015, she graduated from the University of Leeds with an integrated MPhys and BSc (Hons) in Physics and hopes to pursue further studies in marine mammal science. Suzie is a keen SCUBA diver and is currently a Dive Leader Assistant Instructor with the ﻿British Sub-Aqua Club﻿. She was Chair of the Leeds University Union Sub-Aqua Club for two years, overseeing the training, pleasure diving and progression of the 80+ club members.

Suzie spent ten weeks over the summer of 2017 at OrcaLab, an orca research base off north-east Vancouver Island, Canada. There she saw her first wild orca, assisting in the research of the Northern resident orca population. This has affirmed her passion for a life of research and public awareness about this beautiful species.

As well as qualifying as a Marine Mammal Medic with British Divers Marine Life Rescue, Suzie has completed Marine Mammal Surveyor training with wildlife charity ORCA. She is co-founder of Plastic-Free Me, a not-for-profit organisation raising awareness of the harmful nature of plastics, and promoting ways to reduce human consumption.
Learn about orca with Suzie:
Orca Aware blog
Supporting Us

Keith Taylor MEP said: "It is disappointing that animal protection policy does
not prevent orca whales being taken from the wild or being bred and kept in
captivity. With complex social bonds and needs, it is inhumane to keep these
animals in captive situations. This important issue has been highlighted by
marine experts and is sadly confirmed by the short life span they experience in
such environments.

"Orcas are intelligent beings and next to humans they are the most widely distributed mammal in the world. I support the Orca Aware campaign to raise awareness of these amazing creatures and to bring about an end to Orcas being kept in captivity or used in entertainment."

Find out more about our work with Keith.
Orca Aware does not agree that orca or any other cetacean should be kept in captivity.
Back