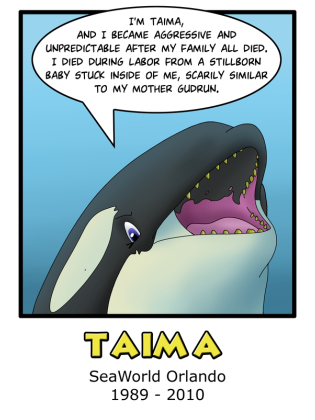 Born to Gudrun who was at the time the dominant matriarch at SeaWorld Orlando, Taima also displayed dominant characteristics that would carry over after her mother passed away and she was later described as co-matriarch with Katina. Following the deaths of Gudrun and her sister Nyar, Taima became unruly and uncontrollable, sometimes refusing to perform in shows. Trainers began to consider her an unpredictable and potentially dangerous orca and water-works were not carried out with her in later years. She spent a lot of her time with Tilikum and was his closest (and only) companion for many years.

All of Taima’s calves were born to Tilikum and her first two, males named Sumar and Tekoa, were subject to aggressive attacks and unusual and dangerous behaviour from their mother. During one incident, Taima chased Sumar onto the slide-out and started attacking him. As a result of this behaviour, Taima was separated from her offspring and both males were shipped to other parks soon after. After this, Taima was put on birth control as she was considered a bad mother. Sumar was born when Taima was only eight and Tekoa when she was eleven years old. Taima’s poor parenting skills may have resulted from her young age (in the wild orca would not produce their first calf until they were typically 12-15 years old), the loss of her family, or it may have been learnt from having watched her mother act aggressively towards her sick sister Nyar. For several years, Taima was separated from all the other orca with the exception of Tilikum, until the birth of her next calf.

In 2007, she gave birth to a female named Malia. While Taima still showed what might be considered strange and certainly aggressive behaviour towards the calf on occasion, she seemed to display improved parenting skills. Taima was reunited with the other orca in the park and spent much of her time with Kalina, as well as other females and their calves. However, Taima's dominant and independent temperament still flared up occasionally, resulting in cancelled shows.

Taima was considered quite a smart individual and would find creative and devious ways to elicit responses from people who would watch her through the glass. This included banging the glass to scare them or sending perfectly timed splashes over the roof above them to soak them as they would enter or leave the viewing area.

SeaWorld allowed Taima to become pregnant once again as soon as she was able to. Having been bred at a very young age and with multiple births in a short time span, this may have damaged her body and threatened her life, similar to her mother Gudrun. When the labour began on June 5th 2010 it lasted for almost an entire day ending in Taima’s death and the death of the calf as her uterus prolapsed.
Back