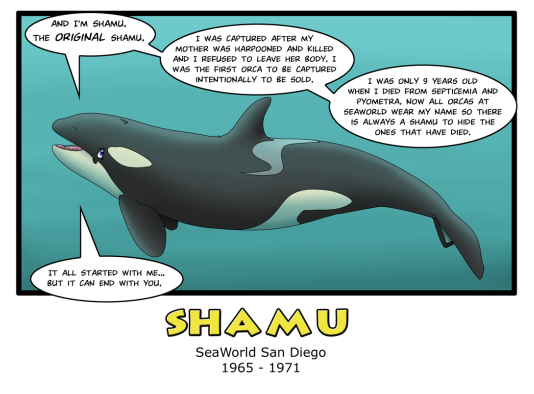 The fourth orca ever captured, the second female and the third individual ever on display, Shamu was also the first orca intentionally captured (all previous captures had been opportunistic). Shamu was caught as a planned companion for the captive orca Namu and her name actually means ‘Friend of Namu’. However, Shamu did not get along with Namu and so was sold to SeaWorld San Diego in December 1965.

SeaWorld had only been open a year before Shamu’s arrival.

She seemed to perform well in shows and even allowed trainers into the water with her. SeaWorld realised what a star attraction Shamu made and started adding more orca to their collection.

During a filmed publicity stunt, Shamu grabbed hold of a SeaWorld staff member’s leg between her teeth and flatly refused to let go, despite all rescue efforts. The staff member was eventually released. Following this incident, Shamu was retired from SeaWorld shows.

In 1971, after less than six years in captivity, Shamu died from septicemia and pyometra (a uterine infection).

While many orca have died in captivity, Shamu's name is the only one still known and her legacy continues today with the renaming of all SeaWorld orca to Shamu. By using Shamu as a generic name for all of their captive orca, SeaWorld erases the individuality of each of their animals, enabling them to conceal any deaths from the public eye. The success of 'Shamu' helped start the race for the orca captures that have removed entire generations from the wild and contributed to the endangered status of some populations.

It all started with Shamu…
Back