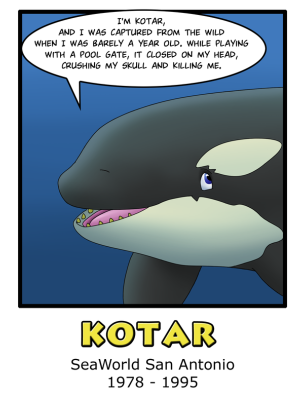 Captured off Iceland when he was barely a year old, Kotar was one of the youngest orca taken from the wild and into captivity.

Initially sent to SeaWorld San Diego, Kotar’s young and gentle nature saw him placed in the petting pools, which he appeared to enjoy; he was young and playful, often teasing the guests and inventing ways to keep himself entertained.

Within 18 months of arriving at the park, Kotar was uplifted and sent to SeaWorld Orlando to perform in shows. However, in 1987, Orlando obtained more animals and Kotar eventually started clashing with a large bull known as Kanduke. The two males did not get along and eventually Kotar bit Kanduke’s genitals causing a nasty injury.

Following this event, Kotar was sent to SeaWorld San Antonio. The park already had several female orca, but no males. Kotar fathered seven calves in total, but only three lived long enough to be named.

Notably, Kotar was the male orca allowed to impregnate Kalina, the original ‘Baby Shamu’ when she was only six years of age.

While he was considered a cheeky and playful whale, Kotar was not without problems. Twice during his life he jumped out of the show tank and into the stands, requiring staff to clear and flood the entire stadium so that they could float Kotar back into the pool.

Kotar also learnt how to open and play with the gates between pools. On the day of his death, Kotar was playing with a gate that closed on his head, crushing his skull. The resulting trauma and extensive blood loss led to his passing.
Back