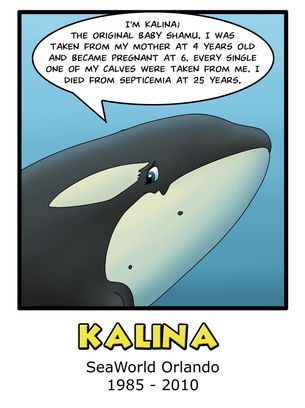 Born in 1985 at SeaWorld Orlando, Kalina was the original Baby Shamu. Her mother was Katina, an orca captured from Iceland and her father was Winston, a Southern resident orca. Winston spent time at Windsor Safari Park in the UK before being relocated to SeaWorld San Diego, where he died in 1986 at 15 years of age.

Celebrated as Baby Shamu, SeaWorld was eager to share Kalina among all of their parks and at four years of age, she was taken from her mother to be exhibited at the other facilities. She was sent alone to SeaWorld Ohio in 1990, to spend time in a tank with orca she did not know. Within ten months, she was seized and moved again to SeaWorld San Diego. Eight months later, she was ripped from her environment yet another time and shipped to SeaWorld San Antonio. Her lack of stability at such a young age meant that Kalina had no time to build strong bonds with other orca and no mother to support and teach her.

Kalina fell pregnant at the age of six at SeaWorld San Antonio. Her son, Keet was born when she was only seven and a half years old; an extremely young age for an orca to have a calf. In the wild, orca typically start calving between twelve to fourteen years of age. She became pregnant again almost as soon as her body was able to and still at a very young age. Kalina was moved back to SeaWorld Orlando in 1994 to give birth to her second son, Keto, when she was only nine years old.

Reunited with her mother, Kalina’s travels and absence resulted in her mother largely ignoring her estranged calf for the rest of her life. At SeaWorld Orlando, Kalina would give birth to a stillbirth, another male named Tuar and a female called Skyla.

Despite having four offspring, every calf was taken away from Kalina and moved elsewhere, leaving Kalina constantly giving birth and not being allowed to care for her calves for long. This is a stark contrast to many orca populations in the wild where the young typically stay with their mother’s family group for extended portions of their lives. For many orca pods, this bond with their mother and family lasts a lifetime.

Towards the end of her life Kalina was bullied frequently by another female named Kayla, with many physical fights occurring that interrupted shows (including the show just before the death of SeaWorld orca trainer Dawn Brancheau in 2010) and left Kalina injured. In October 2010, Kalina died from septicemia.
Back