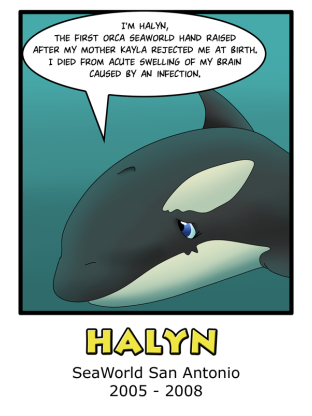 Born at SeaWorld San Antonio to first-time mother Kayla, Halyn was rejected and abandoned by Kayla the moment that she was born. Kayla became aggressive towards her daughter and showed no interest in caring for the calf.  Kayla was inexperienced and had not had an older orca to teach her how to be a mother.

Staff stepped in to try and hand-raise Halyn, keeping her out of public view in their animal care section. They held her in a pool with a bottlenose dolphin briefly. Staff ‘milked’ Kayla and created a formula using this milk to bottle feed Halyn. She was fed every two hours by staff and was monitored closely around the clock.

After three months, Halyn was moved back to the orca stadium, but was not allowed to mingle with the other orca. Instead, she was separated from them, only able to watch through the gate bars. She was eventually introduced to her father Keet in 2007. Halyn would never meet her mother Kayla, as Kayla was moved to Seaworld Orlando.

Eventually, SeaWorld started training Halyn and used her story to claim a success in hand-raising a newborn orca calf. However, in 2008, Halyn's behaviour changed suddenly and unexpectedly and she died from an infection that caused her brain to swell.

Since Halyn, two more young calves, Adan and Victoria, have been abandoned by their mother Kohana and of the two, only one is still alive.
Back