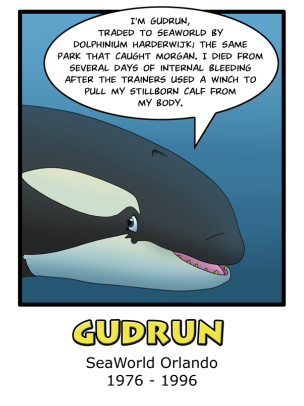 One of the first orca to be caught from Iceland, Gudrun was sent to Dolphinarium Harderwijk in the Netherlands. Harderwijk housed her for several years, her only companions being bottlenose dolphins. As she grew larger and became sexually mature, she was traded to SeaWorld for several false killer whales on a breeding loan, with part of the trade agreement being that Harderwijk would be given every second calf of hers; something that would never come to pass.

SeaWorld impregnated Gudrun as soon as possible and within twenty months of arriving, she gave birth to her first calf in 1989, a female who was named Taima. Gudrun was a good mother to Taima.

As a result of Gudrun having a perfect dorsal fin and markings, she was regularly used in shows and photo shoots and was the preferred individual to be used for SeaWorld's promotional items. They regularly had her present herself on the slide-out area so that trainers could sit children on her back during shows. This was done even while Gudrun was heavily pregnant.

In 1993, Gudrun gave birth to a second female calf, named Nyar. Nyar was born with physical and psychological disabilities and after a few months, Gudrun became aggressive with her as her symptoms worsened; Gudrun even attempted to drown Nyar repeatedly.

Gudrun was impregnated again almost immediately after Nyar and the little time between the two pregnancies did not give her body enough time to recover. Trainers continued to have her haul out on the slide-out area while pregnant, meaning the full force of Gudrun's weight was putting pressure on the unborn calf.

This final pregnancy resulted in Gudrun's death. The third calf was stillborn and became stuck within her body. In order to remove the calf, trainers inserted a metal hook and cable into Gudrun's body and used a winch to pull the dead calf out of her. The resulting internal bleeding from this act slowly killed her over the following four days. Before dying Gudrun approached the gate where Nyar was, as if to make amends, before she finally passed away.
Back