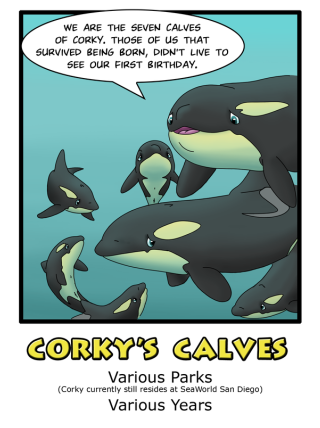 Corky was an orca captured from British Columbia, soon after the Northern resident orca scientific naming database was created, resulting in Corky having her own code. She is listed as A16. Many of her family in the wild are known and recorded. Corky was captured when she was three years old.

Living at Marineland of the Pacific following her capture in December 1969, Corky was kept with other orca, most dying within three years of her arrival. She was left with an orca bull named Orky, who went on to father most of her children.

When Corky was pregnant with her first calf, trainers did not realise and were only enlightened when they saw tiny tail flukes appear during the birth. However, Corky likely did not know anything about raising calves as she was only a young calf herself when captured, so her first baby was left unfed and ignored. Trainers attempted to step in but were too late as the baby died 18 days later from pneumonia and brain damage.

Her second calf was born on Halloween, a male they named Spooky. Again, Corky did not nurse the baby and Spooky died within eleven days of being born. Another calf that was conceived also died and staff began attempting to train Corky on how to care for an infant.

Kiva was Corky’s fourth child, a young female and the longest lived of all Corky’s offspring. At first Kiva seemed fine, but despite the attempts to train Corky, she still did not nurse her calf correctly. All of Corky’s calves tried to suckle from her eye patches or other white parts of her body; Corky’s inexperience and the small size of her tank were possible factors in this sad behaviour. Trainers again stepped in and while at first Corky seemed fine with them feeding Kiva, she later began to interrupt the feeding sessions and played rough with the young calf. After moving the two to a new pool, Kiva’s breathing suddenly became erratic and she died.

Corky went on to have several more calves. Those that were not stillbirths or miscarriages all died within days of being born. Corky and Orky were eventually sold to SeaWorld San Diego in 1987 where Corky had a final stillbirth calf.

Corky can no longer produce calves, but has acted as a surrogate mother and at times has even tried to claim other mothers' offspring as her own. This surrogacy behaviour may have triggered the aggressive behaviour that eventually led to Kandu 5’s death.

Corky still lives as part of the SeaWorld San Diego collection, though none of her seven calves survived for longer than two months.
Back