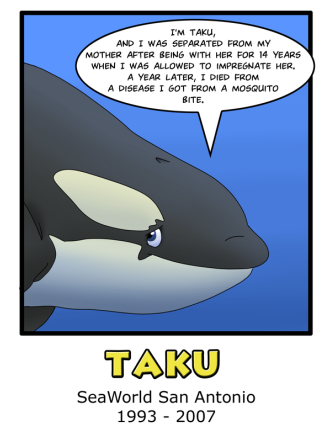 Born to Katina, sired by Tilikum and younger brother of the ‘Baby Shamu’ Kalina, Taku was a prime example of how close orca in the wild are to their mothers. He was very close to Katina and remained with her for 13 years, even as younger siblings came and went.

Becoming one of the largest maturing males in SeaWorld, Taku was also considered one of the gentlest. Despite his size, Taku was regularly used for water-works.

Taku mated with the orca Takara when she was moved to Orlando and the young male Trua was born. Soon after Taku mated with his own mother Katina, producing SeaWorld’s first inbred calf, Nalani. Taku spent most of his time with his mother and siblings and had only periodic access to other females. This restricted social access to the other orca, as well as the lack of anything resembling a natural social group, possibly influenced the inbreeding.

After this happened, Taku was separated from his mother in early 2007 and was sent to SeaWorld San Antonio, where he lived for less than a year. While logging at the surface, a behaviour that likely arose from boredom, Taku was thought to have been bitten by a mosquito that transferred a virus to him that the orca immune system is naive to. This claimed his life, meaning that Katina would never see her son again.

You can read more about Taku's cause of death in the peer-reviewed published article 'Orca captivity and vulnerability to mosquito-transmitted viruses' by Jeffrey Ventre and John Jett.
Back