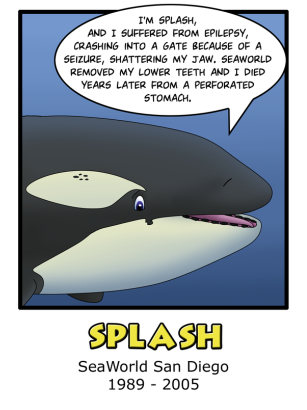 The first orca born at Marineland Canada under the name Katak, Splash had multiple health problems; he regularly had seizures that forced staff to prescribe controlling medication.

Splash was removed from his mother at two years of age and sent to SeaWorld San Diego for better care. He was adopted by Corky who acted as a surrogate mother and was renamed Splash.

Splash bonded with the orca Orkid and settled in as part of the San Diego collection of whales.

In 1995, he suffered a seizure while playing with Orkid and crashed into a gate. This shattered his lower jaw and Splash was moved to the medical pool. While the infection from the initial injury healed, the damage and later infections forced the trainers to remove all of the teeth in his lower jaw. This resulted in splash being unable to fully close his mouth.

A week before his death Splash lost his appetite and was put onto antibiotics. He did not improve and his perforated stomach claimed him as his companions Orkid and Sumar watched from the medical pool gates.
Back