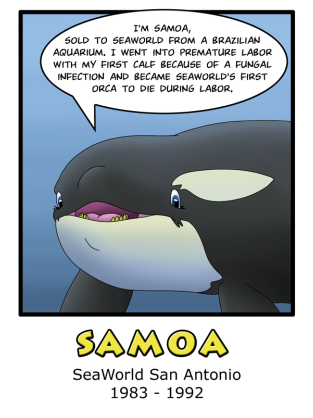 In 1983, Samoa was captured off the coast of Iceland along with two other males; Nandu and the more famously known, Tilikum. Nandu and Samoa were both purchased and sent to the Aquarama Sao Paulo in Brazil, where they resided together.

Nandu showed interest in the toys trainers offered them, even eating the basketballs, but Samoa ignored them. Nandu died five years after arriving, while Samoa continued to live alone for the next year, with only a few dolphins for companionship.

Purchased by SeaWorld, Samoa was sent to their park in Ohio in 1989 where she performed alongside other orca, namely the ‘Baby Shamu’ Kalina. Before her move her name was unknown, but SeaWorld gave her a new name, Samoa.

During the off season, she was sent to SeaWorld San Antonio, where she was introduced to the young male Kotar and became pregnant by him. The pregnancy seemed to progress well for her at first.

However, on March 14th 1992, a fungal infection Samoa had contracted forced her into premature labour and Samoa died within two hours. She became Seaworld’s first orca to die from birth complications.
Back