Are you confused by the system of numbers and letters used to identify the Northern and Southern resident orca of the Pacific Northwest? The letter (e.g. 'I' in the case of I15) signifies the pod the animals belong to and the number (e.g. 15) indicates the matriline of that particular group of individuals (the female matriarch). The Northern residents consist of three clans (A, G and R), of which the I15s belong to G clan. Here's a great resource to try and get to grips with who is who and which animals belong to which pod and clan. At the top there are three rows of boxes - the first row show the pods belonging to A clan, the second to G clan and the final row show the pods belonging to R clan. Click on each box to follow the family tree of each group back to the matriarchal female. 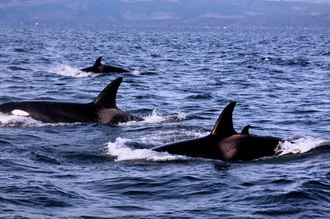 Thank you to Jayne for sharing her experiences:

I've just returned from B.C Canada and spent an amazing time on the water with the Mackay family. I saw the northern resident orca's A23s, A25s, I15s, A30s, A12s and we think A75 has a baby this year which was so cute. The pacific white sided dolphins are on the increase pods which kept chasing the resident orcas and the humpbacks it was like watching bees buzz around a hive - one humpback got quite vocal and the orcas were taking longer dives to get rid of the little critters... The dolphins were lovely to see but I never thought they chased larger whales let alone one of the top preditors in the sea! I was very lucky to listen to I15s on the hydrophone the eeyore sounds they make are breathtaking; the eeyore sounds are typical of the G Clan and the A Clan make cat meow sounds. On a more serious note though it's not all plain swimming for the majestic resident orcas; this year they are having to swim longer distances for salmon. Apparently the wild stocks of salmon are decreasing each year, mainly due to over-fishing and increased fish farming.
Back