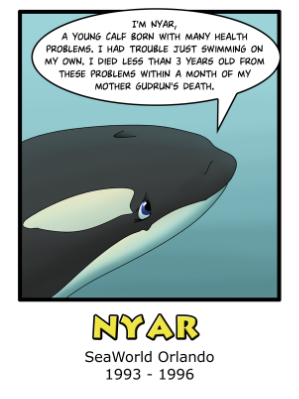 Nyar was the second calf of Gudrun, fathered by Icelandic orca Tilikum and younger sister to Taima. Nyar was a calf born with many health problems and they became so serious that her own mother Gudrun attempted to drown her several times.

After several months trainers noticed that Nyar was not progressing like Taku, the other calf born the same year. Nyar’s condition deteriorated until she was having trouble even swimming on a straight course.

Blood tests from Nyar revealed that she had a severely weak immune system and several psychological issues, resulting in the young female not being allowed to participate in shows. Her immune system meant that she was prone to become ill with disease and infections.

After Gudrun began to get aggressive with Nyar, trainers were forced to separate the two permanently. Kept mostly by herself or alongside Tilikum, Nyar was typically kept out of public view as a result of her situation.

Soon after her mother Gudrun died from complications during the birth of her third calf, Nyar’s own health deteriorated and she started finding it difficult to breathe. Less than a month after Gudrun died, Nyar’s own immune system gave out and she sadly passed away.
Back