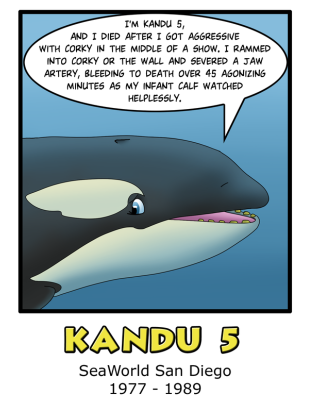 Kandu 5 was captured from Iceland and sent to the Dolfinarium Harderwijk in the Netherlands, before being sent to SeaWorld San Diego.

While she was a good performer at SeaWorld, she displayed aggressive behaviours towards her trainers on several occasions and in 1984, she pinned a trainer against the wall. Kandu 5 was described as a moody individual and water-work with her seemed to be kept to a minimal.

In 1986, she gave birth to her first calf that was stillborn. Almost as soon as she was able, Kandu 5 was pregnant again, this time giving birth to a young female named Orkid in 1988. Kandu 5 was a protective of Orkid and proved to be a good mother.

However, another female who had seven unsuccessful calves, Corky, showed interest in Orkid and often attempted to take her away from Kandu 5, resulting in conflict between the two females.

On August 21st 1989, Corky and Orkid were performing together in front of an audience and Kandu 5 was kept in the back pool. As Kandu 5 gained access to the show pool, she charged at Corky aggressively.

It is unclear if she struck Corky or a wall, but either way, Kandu 5 broke her jaw and in front of a horrified crowd of onlookers and started bleeding profusely. Within minutes she began to exhale geysers of blood from her blowhole each time she breathed.

Swimming to the back pool with Orkid, Kandu 5 bled to death over 45 minutes. Orkid remained by her side the entire time, eventually swimming helplessly around her mother’s lifeless body once Kandu 5 sank to the bottom of the pool. SeaWorld has never clarified what caused the attack, though Corky and Kandu 5 were from two different populations from opposite sides of the world. They did not communicate using the same dialects and would never have mixed or interacted in any way in the wild. After Corky lost many calves in captivity, she may have tried to take over caring for Kandu 5's calf, leading to conflict between the two females. It is possible that the act of aggression rose from some sort of frustrated motivation arising from confinement in captivity.

In the wild, conflict between orca that results in serious injury is rarely observed. Most serious acts of aggression between free-ranging individuals can be avoided by moving away from the situation, an option that is not available in a captive setting.
Back